I’ve been busy working with my local theatre as they staged their spring production of Hide and Shriek by Tim Kelly. I had a bit of a hand in everything this time around. I was involved with general administrative production work, set decoration, arranging advertising, running social media outreach, and acting.

Administrative production work is a catchall for general things that need to be done (printing tickets, compiling program information, inquiries and bookings etc). The social media side is a bit more creative. I had the opportunity to go full on cheesy with the campaign publishing fun little posts like the one below. 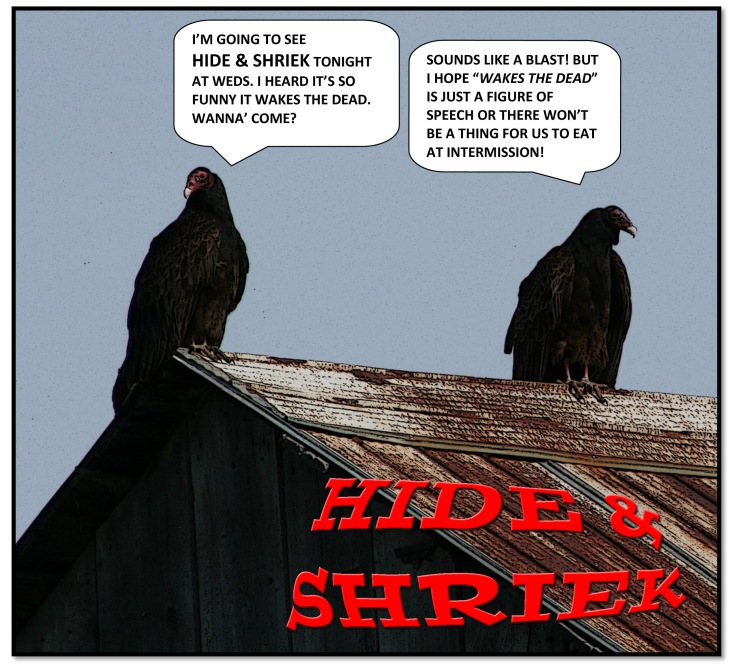 I edited this original photograph with the poster edge filter, added some corny text, and ended up with a quirky promotion piece. I did some gif posts as well to change it up.

The set had a standard footprint. Door and window locations were determined by plot line and blocking. The space was to be reminiscent of a once stately home that had fallen into disrepair through neglect.

The set took me about 20 hours to decorate. 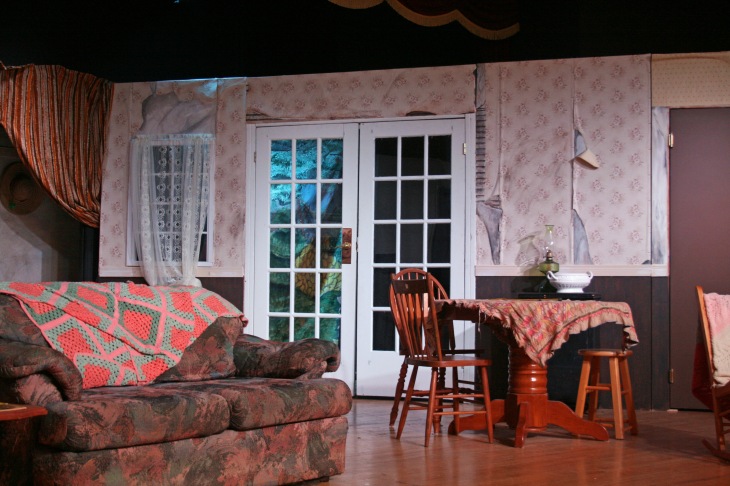 If you’ve seen any of my prior theatre posts you may remember the back drop behind the french doors from other productions. It’s painted on a bed sheet I picked up at a thrift store for $3. I’ve used it in 4 plays so I think I got my money’s worth. 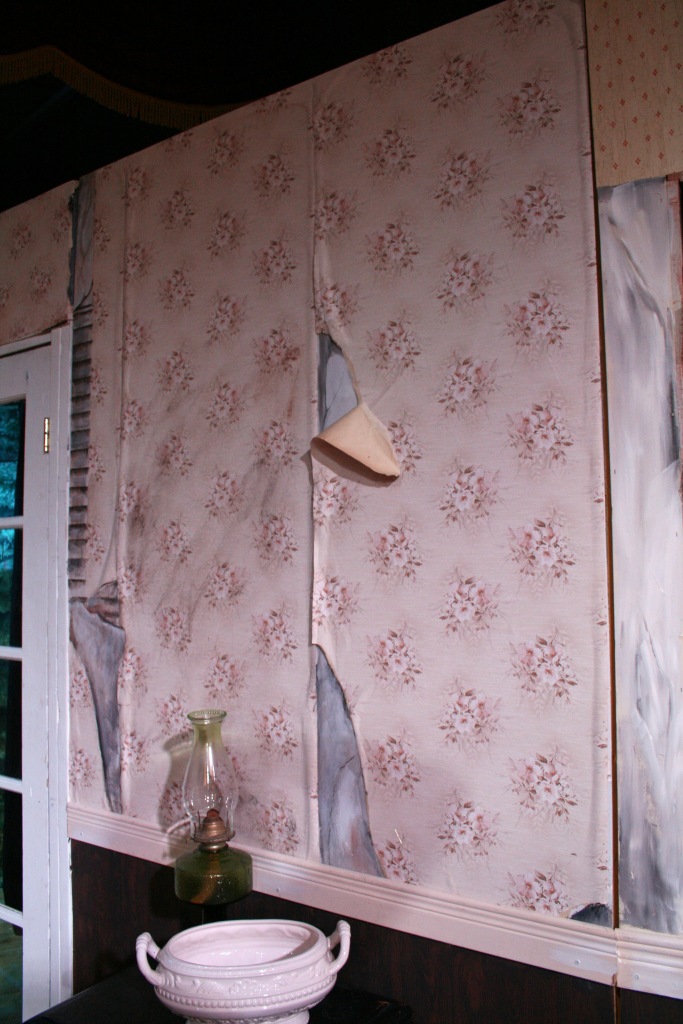 A selection of old mismatched wallpaper was the perfect material to use for the “walls” working to express traditional and multilayered decorative sensibilities. Backed with age weakened paste, the paper sagged in a way that spoke to the neglect narrative. I have a handy dandy tool that generated the appearance of wood grain on the bottom of the flats.

I used faux finishes to create the look of bare plaster and lathe revealed through breaks in the wallpaper further emphasizing the “age” of the stage setting.

Liberal smears of “dirt”, mismatched furniture, and missing fixtures (like the absence of stair posts and railing) were meant to strengthen the atmosphere. I think this might have been the fifth time I’ve repainted that fireplace. It’s made from plaster laid over a wood and chicken wire frame and suits any kind of set (depending on the colour choice).

An integral plot point revolved around a fictional John Singer Sargent painting. I did a quick study in acrylic based on an early Sargent portrait of Gabriel Fauré. I felt it would have the right feel when seen from the audience. It’s not an exact copy but props like this only need to look good from far away so there’s no need to be too fiddly with them.

This organization plans to stage Treasure Island in the near future. Some of the scenery from the 2017 production of Peter Pan will be a good fit for the proposed play. These theatre flats are surfaced with thin mahogany sheets. Rather than painting them over, the skins were flipped to preserve the imagery so it’ll be available for future use. This picture shows the section of a flipped skin that was the pirate ship door in Peter Pan. The wine corks cover the end of trim screws protecting actors as they moved behind the set.

Here is the view from the stage on preview night before the doors opened. This production saw me step out from back of the house onto the stage.  I’ve been in a number of plays but this was the first one for which I had two character roles to play. I also had to learn a new song on the harmonica. The hardest part about that was one of my dogs HATES the harmonica. His brother isn’t too keen either but I feel like one gets the other “going”. It’s impossible to practice when you can’t hear yourself over the howling!

The play was well attended so thank goodness not everyone feels the same way about harmonicas that good old Lester B. does.